The Toronto Blue Jays have lose Randal Grichuk to the 10-Day disabled list with an injured knee. Recall middle-infielder Ngoepe. 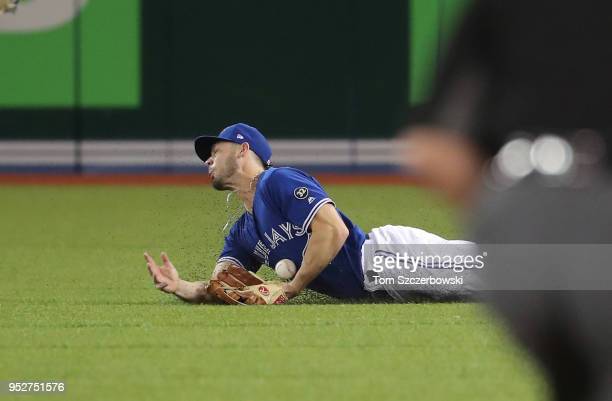 The Blue Jays have placed outfielder Randal Grichuk on the 10-day disabled list with an apparent knee injury. If I had to take a wild guess, it probably occurred when Grichuk took an awkward fall while tracking down a shallow, fast dropping blooper in the first inning of yesterday’s game against the Texas Rangers. To everyone’s surprise Grichuk hung on for the catch as he smothered the ball into his chest and doubled up the runner at second base. Strangely enough, Grichuk, who’s been mightily struggling all season long so far stayed in the game and went a very formidable 2-4 with two RBI. Grichuk was picked off at first base during a 6th inning rally, so maybe he was feeling the effects of his fall. Now, I’m not a doctor, and that was all speculation, but if I was a betting man, that’s where I’d say the injury took place.

The injury comes at a very intriguing time for the Blue Jays as earlier in the week they optioned Devon Travis down to AAA for an extra arm in the bullpen in Carlos Ramirez. But they’ve elected to recall infielder Gift Ngoepe in the meantime because he can be sent down in short order. Ngoepe will likely be optioned back down to AAA when Josh Donaldson makes his return to the hot corner. Here’s to hoping that happens soon!

The Blue Jays have several corner outfielders on the team to fill the void Grichuk will leave in Curtis Granderson, Steve Pearce and Teoscar Hernandez. And if need be Lourdes Gurriel Jr. Aledmys Diaz, Yangervis Solarte and even Kendrys Morales all have limited experience as corner outfielders. I mainly threw in that last point because I thought it would be fun to imagine Morales patrolling the outfield.

But besides that, I hope Grichuk makes a full recovery, and this injury doesn’t further extend his woes at the plate. As mentioned above, he did have two hits and two RBI in Sunday’s rubber match against the Texas Rangers. Many have accused Grichuk of trying to do too much ever since coming over in the offseason trade with the Cardinals. He promised that he would work on his pitch recognition to make more consistent contact and draw more walks. But as the age-old saying goes, “Don’t fix it if it isn’t broke.” Coming into this season Grichuk ranked 15th since 2015 in Isolated power or ISO, minimum 1000 plate appearances. That’s ahead of guys like Adam Duvall, Anthony Rizzo, Kris Bryant, Jay Bruce, Joey Votto and Paul Goldschmidt! Grichuk is a guy who’s mashed the ball his entire career and could be a huge bat in the middle of Jay’s order if he regains form. It’s worth pointing out that his xwOBA this season is 0.326 with his actual wOBA being 0.199, (MLB average wOBA is .334) a 0.127-point difference, which is the third largest gap on the Jays. Luck and skill are often synonymous, so lets hope that the two balance out and Grichuk can return to being his former self.

Wade is a long time baseball fan who has been involved with the game for over 30 years. Including as a former college player, amateur pitching coach, and blogger.

Wade is a long time baseball fan who has been involved with the game for over 30 years. Including as a former college player, amateur pitching coach, and blogger.

Blue Jays Have No Easy Answers for Upgrades